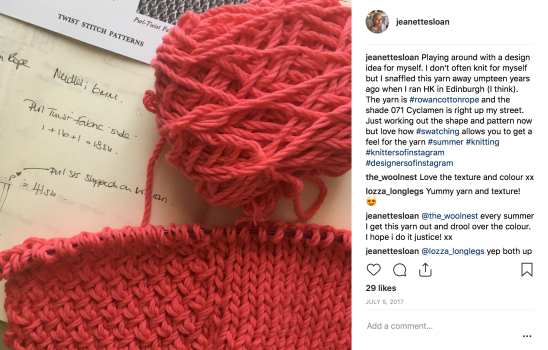 I think I first posted about working with this shade of Rowan’s Cotton Rope back in July last year and as is often the case, it’s been languishing in my stash for years before that. Although my memory is pretty shocking nowadays I clearly remember the day this yarn joined the realms of the Sloan Stash. I’d bought it as stock whilst running HKhandknit in Edinburgh and fell in love with the colour as soon as I clapped eyes on it. It sat, and sat and sat on the shelves for a whole summer (obviously at the time too bright for my Edinburgh customers) and when Rowan decided to discontinue it I felt it would be happiest and best appreciated in my possession. All 22 balls of it. 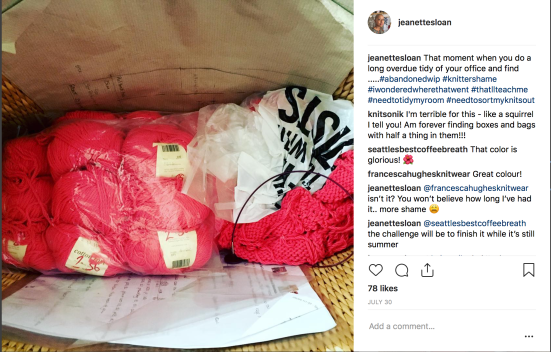 So fast forward to today and I’ve finally cast off the cardigan that that precious, fantastic coloured yarn has finally become. It seems to have been a long road to get to this point but that may largely be due to the fact everything involving numbers, concentration and memory can often feel like pulling teeth if my brain isn’t playing ball. I vaguely remember first dragging the yarn out of the loft back in 2015 PreC (pre craniotomy) but didn’t start doodling on paper until July 2017 PostC (post craniotomy). It wasn’t until I tidied my office almost exactly 12 months later that I moved a hug pile of fabric I’d been using to make cushions and came across the abandoned wip squashed into the bottom of a basket with my ‘missing’ 6 mm Knit Pro tips and 80 cm cable. Since my surgery I’ve dreaded making discoveries like this. Not as you’d imagine, because of the guilt you normally feel because you haven’t finished yet another project. It’s trying to get back into the headspace I was in when I drew up those original sketches and made those initial calculations which is so much like reading the work of a stranger that it fills me with such dread it sometimes causes enough stress to bring on a migraine.

Thankfully though in this case I was so genuinely pleased to have found 1. the yarn again – I mean THAT COLOUR!!! –  and 2. those bloody 6mm tips (I thought they’d gone for good) that I just went right back to the drawing board. Bizarrely enough for a ‘me’ knit I’d actually made lots of helpfully detailed written notes about what I was thinking so it actually wasn’t as difficult as I thought to pick up where I’d left off . So, after making a couple of changes ( dropping the needle size to 5.50mm) I was soon up and running again. Ok there’s been a bit of frogging but the combination of this yarn, large needles and the deliciously textured purl twist stitch I used on Mrs T’s Mittens made this a really really enjoyable design to knit. Now it’s finally cast off I’m really pleased with the results. 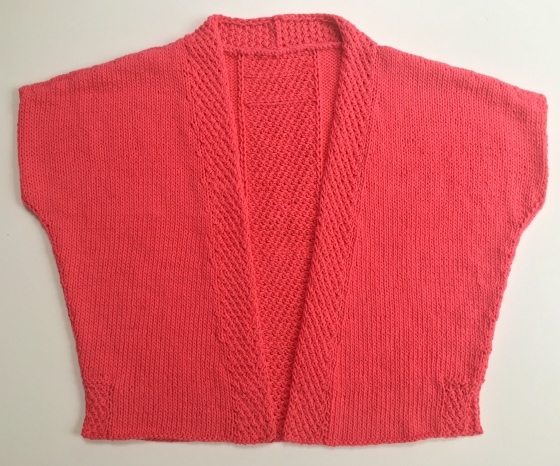 I wanted a relaxed, boxy knit that would be easy to wear in the summer when the sun’s gone down and it gets a bit chilly. Because of the chunky weight of the yarn I wanted very few seams so it’s actually worked in one piece on a long circular needle whilst slipped stitches on the wrong side of the garment give the appearance of a seam but without the bulk.

There’s a wide panel of purl twist texture in the centre back which is matched by the front facing bands which are worked as you knit, rather than added on afterwards (again avoiding any joins) and these run on over the shoulders to join at the centre back of the neck. Ah yes, that join. There were a couple of issues with the neckband as I’d originally envisaged grafting it together but after a couple of failed attempts where it just didn’t look of feel right I plumped for casting off both sets of stitches off together which I’m much happier with.

All in all I love the results.

Would  I knit it again? Definitely. Probably a winter version with sleeves.

Would I make any changes? Mmmm probably, after all there’s always something you could tweak to make improvements. But for now I’m happy that this keeps summer going just a little bit longer. That and the fact that we’re off to Corsica for a week on Saturday!

At my age I’m more excited than I should be about going on holiday but we’ve been through a lot since our last foreign break seven years ago so to celebrate I’m having a sale over on  Ravelry. There’s 25% off all patterns from now until the end of September – no code needed – so you could get a headstart on some of that C*#!+%?mas gift knitting whilst I head off to the sun. Sorry it’s just too early to use that particular ‘C word’.

The Shameful Sheep
The OM Project
House of Knit